Bruce Gandy grew up in Victoria, British Columbia, where his father was pipe-major of the local Canadian Scottish Regiment pipe band, and he learned to play from notable pipers James W. Troy and Hal Senyk. After several years in the City of Victoria Pipe Band, Bruce moved to Ontario, where he married into the piping Rollo family, and established himself as a top solo and band competitor as a member of the 1987 World Champion 78th Fraser Highlanders. Bruce also established himself as a composer of note, with many of his tunes being played by the 78th Frasers and other top bands. Bruce moved to Prince Edward Island to became Head Piping Instructor at the College of Piping and Celtic Performing Arts, and later he took the position of Piping Instructor at the Halifax Citadel, where he remains today. For the last 20 years, Bruce has been one of the dominant players on the World scene, winning the Gold Medals for Piobaireachd at The Northern Meeting (Inverness) and the Argyllshire Gathering (Oban), the Bratach Gorm (Blue Banner) in London, The Silver Star for Former Winners March, Strathspey and Reel and having been 2nd prize winner at the Glenfiddich Championships . As well, Bruce has published four books of music, produced online teaching and workshops that reach around the world, developed his own pipe chanter with McCallum Bagpipes and he is in regular demand as a tutor and performer. 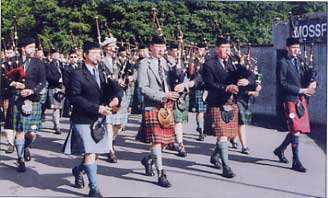 Leading a band of good friends and fellow competitors to the Games in Oban, the day after winning the Gold Medal.
[Photo: Piping Times]

STRATHCLYDE POLICE PIPE BAND
Was a guest player with the Polis under Pipe-Major Don Bradford in 2010.

CITY OF VICTORIA
Joined City of Victoria Pipe Band at age 12 and played with them from 1974-1982.